In order to use RunSignup, your browser must accept cookies. Otherwise, you will not be able to register for races or use other functionality of the website. However, your browser doesn't appear to allow cookies by default.

If you still see this message after clicking the link, then your browser settings are likely set to not allow cookies. Please try enabling cookies. You can find instructions at https://www.whatismybrowser.com/guides/how-to-enable-cookies/auto.

The Princeton Half Marathon is a 13.1 mile, USATF-certified, Grand Prix, road and trail run featuring Princeton’s cultural and historic landmarks.

A USATF Certified map of the course can be viewed here.

Map with Estimated Runner Times can be found by clicking PDF at the bottom of the page. 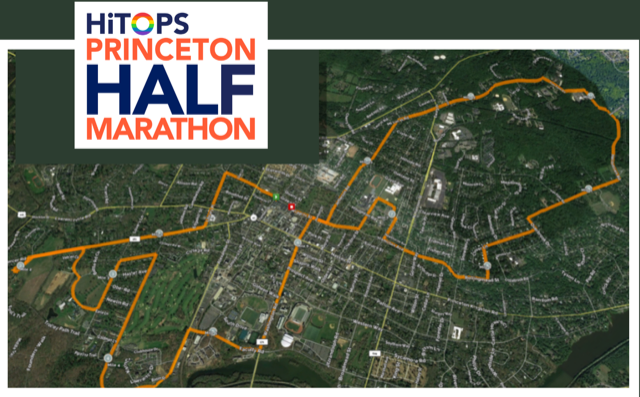 Princeton, New Jersey – famous for its Ivy League University and famous resident, Albert Einstein, hosts the Princeton Half Marathon, a road and trail race that takes runners from the center of iconic downtown Princeton through the neighborhoods of some of America’s most admired citizens. Runners will see majestic views of campus, colonial mansions, award-winning architectural buildings and revolutionary battlefields and homes of many diverse residents  with a backdrop of glorious colors that can only be summoned by autumn in Princeton.

The course takes runners through city streets, starting at Paul Robeson Way at 7:00 AM. The initially flat course will lead runners through Presidents’ Promenade, where runners will see the homes of US Presidents Grover Cleveland and Woodrow Wilson. Through Einstein Mile & Battlefield Breakthrough, runners will pass the through the neighborhoods of Albert Einstein and Sylvia Beach which hosted guests like Marianne Davies, Helen Keller and Mark Twain then run where George Washington led Revolutionary troops during the most decisive battle of the Revolutionary War.  At Oppenheimer Atomic Hill, runners pass the home of the inventor of the atomic bomb then around to Neumann’s Curve where the homes and hangouts of computing genius Richard Feynman, Alan Turing, John von Neumann, Kurt Godel and Max Veblen are revealed.

Once runners ascend to Carnegie Cut Through, the course takes a turn through Princeton University campus, where runners might catch a glimpse of one of the top 8% of the world’s undergraduate students, a Nobel Prize Winner or the Olympic Rowing Team who practices on gorgeous Lake Carnegie, a gift from Andrew Carnegie. At Conrad’s Lift Off (named to celebrate the PU graduate who left a Princeton University flag on the moon), runners will ascend into a canopy of Pritzkar Prize Winning architecture. As the course makes its way through the Little Tiger Trail -near Princeton High School where runners may reflect that Princeton was the first to integrate their public school system before it was federally mandated into the Gallup Gallop trek, runners’ minds can wander as they see first hand why George Gallup believed Princeton embodied the perfect amount of diversity; Gallup performed the first public polls on the main street in Princeton.

Along Signer Circle, runners will see some of the most stunning arboreal displays as they pass the home of John Hart, one of the four Signers of the Declaration of Independence from Princeton. The Black Squirrel Scamper and Other Side of Paradise districts will remind runners why New Jersey is called The Garden State. The course unfolds toward Superhero Highway, named for Princeton resident Christopher Reeves, famous for his portrayal of Superman. As runners summon all the supernatural strength they can muster, it’s a duel for victory in the final mile – the Aaron Burr, Jr. Killer Mile. (As much as the famous musical vilifies our famous dueling politician, he is considered one of the first feminists in the new country by demanding his daughter be tutored in the same curriculum as young men during the day.)  Participants will complete in the heart of Princeton just steps from where, in 1903, Mary “Mother” Jones led the famous March of the Mill crusade with several hundred children to fight for workers rights.

Princeton has been home to a diverse group of champions. Runners can expect a cheering finish line full of residents eager to congratulate the astounding personal achievement of completing a half marathon!

If you continue to use this site, you consent to use all cookies.